There was a lot of media coverage when the new Microchipping Law came into force on April 6th 2016, but a lot of dog owners aren’t aware that legally their dog is also required to wear an I.D. Tag too. So we thought we would put together a blog post which clears things up.

As stated by the Control of Dogs Order 1992,  “any dog in a public place should wear the name and address of the owner either enscribed on the collar or a name plate attached to it”. Failure the meet these requirements can apparently result in a fine up to £5,000. There are some dogs which are exempt from this law, for example trained & working sheep dogs, guide dogs & police dogs.

So what does the law actually mean? The law insists that every pet dog should have an I.D tag which includes the following information when out in a public place: 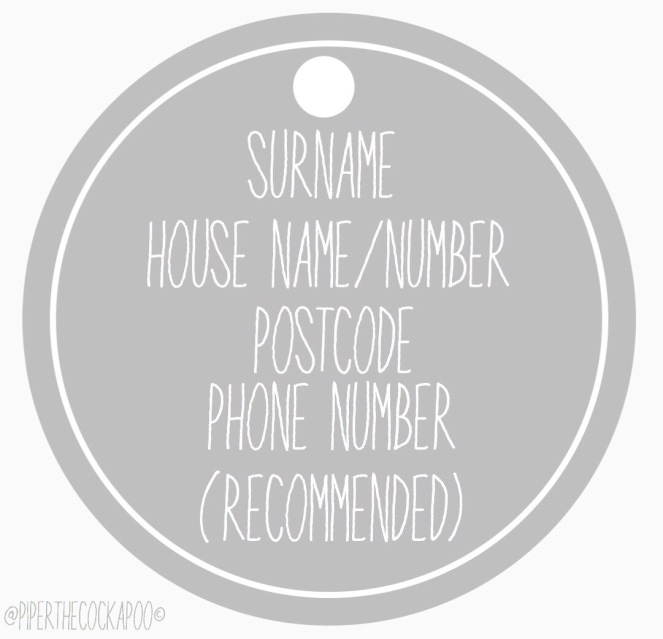 Legally you are required to have:

Phone numbers are optional, but highly recommended. Remember, this law was introduced in 1992 (that’s 25 years ago!) and a lot had changed in that time. In 1992 mobile phones weren’t as widely available as they are now, so it was no doubt easier to simply look at the ID tag of the lost tag, see the address and physically return the dog to their house. People now are very rarely without their phone at arms reach, so it would almost certainly be easier to ring the number from a tag rather than find & take the dog back home.

There’s always a double-sided argument about whether or not to include the dog’s name or not. Some people argue that it would comfort their dog to be able to hear their name in a time of distress, where as others think it aids dog thieves as they are able to communicate better with the dog. I personally haven’t put Piper’s name on her tag, because she is timid around strangers so is unlikely to approach one regardless of whether they are saying her name or not. If you think your dog may benefit from hearing their name, you always have the option to put both their name and your surname. Remember, you can add as much information as you like, providing you have included all that the law requires!

There’s also the argument of whether or not to include your address, as putting it on your tag basically advertises where your dog lives. I am of the opinion that, you’re never really going to let a stranger get close enough to your dog that they can bend down and read the information on your tag. Besides, you only have to include house name/number & postcode and for most people that isn’t enough to know exactly where you live without a google, and by the time they have done that you would hope they have forgotten your information. Some owners also choose to include their full address (house name/number, street address, town/city, postcode) in the hope that this will increase the chances of them being reunited with the dog should they go missing.

Here is the information which I have on Piper’s ID Tag: 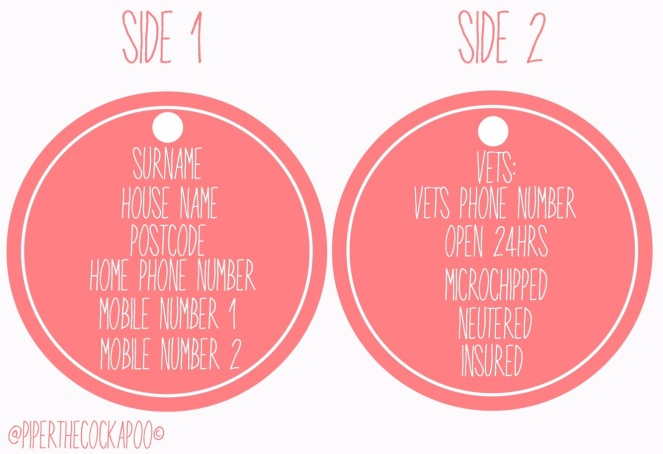 I have put 3 different phone numbers on with that hope that if Piper were to go missing, whoever found her would have chance of getting through to at least one of them.

I also put the vets number on firstly because they are open 24 hours 7 days a week, so there would always be someone available to help. But the main reason that I did this, is that if Piper were to be found injured and whoever had found her was unable to get a hold of me, they would be able to take her to a vets practice which she is familiar with and I hope this would offer her some comfort. I added the open 24hrs line in case she was found at a time which the practice wouldn’t be open, to avoid the person who found her waiting until opening hours to call. I would rather pay an out of hours fee and Piper got the care she needed sooner.

Microchipped is on purely because most people seem to include it and there is also more information stored on her chip than there is on her ID tag, so it may be useful to whoever were to find her. I then included neutered & insured as these are apparently supposed to be deterrents to dog thieves. In the very unlikely event that Piper were to be found by someone with the wrong intentions, I hope it would make them think twice. Placing ‘neutered’ is supposed to look unattractive to dog thieves as it means that the dog cannot be used for breeding purposes, one of the main reasons dogs get stolen. This is pretty obvious just by looking at male dogs, but for females this certainly isn’t clear, so to me it was a must to include. If a dog is insured, most insurance policies include cover in the event of a dog going missing or being stolen. This means that owners are have a pot of money available to help reunite them with their dog, so again dog looks less attractive to thieves.

To me it was important that Piper’s tag was practical rather than just “looking pretty”. After looking at the different options available, I settled with this ID Tag. It’s made from acrylic so is very hard-wearing and easy to clean. I found that I was having to replace her metal ones every 6 months or so as they had faded are weren’t easy to read anymore. We have had this tag for probably around 8 months now and it is still looking brand new. The tags are a little larger (but not too big that it sticks out and becomes obvious, remember Piper is only tiny!) and the writing on them is clear to read. You can have up to 8 lines on each side so can fit plenty of information on! For obvious reasons I haven’t attached a photo of Piper’s actual tag, but she has the 33cm size in the colours Ruby & White. Having an acrylic tag has also really reduced the annoying rattling sound ID tags can make!

I have found that you can often buy much better quality tags online for cheaper than you can buy in-store.

Because Piper travels with me a lot, I thought it would be wise to invest in a travel tag to put on her collar when we are on the go. I have heard a few horror stories of dogs going missing on holiday and the owners not being able to take the dog back because the dog was suspected stolen due to the address on the tag being 200 miles away.

Here is what we have on her holiday tag: 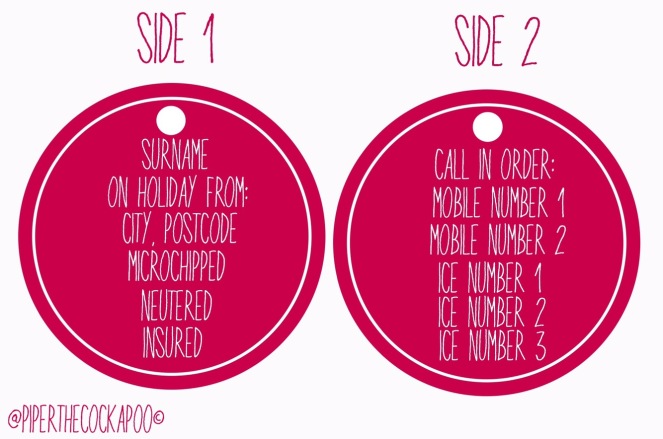 Like the previous tag, I have my surname & postcode, then microchipped, neutered & insured. I have added the fact that we are on holiday as well as the city we are from, so whoever found her would have a rough idea of what area Piper comes from.  Then on the other side I have 5 numbers with a request they are called in the order there are shown. 1st I have my phone number, then my Mum’s followed by 3 “In Case of Emergency” (I.C.E) contacts. These are people who would not be on holiday with me, but know both myself and Piper well enough to be able to help in the situation. It’s important to have the number for at least one emergency contact, as if you are in an area with no phone signal, they would be able to help in your absence.

I then buy a cheap metal ID tag, like this one, and add the address of holiday cottage or hotel which we are staying at, as well as a phone number for the hotel or host if one is available. See an example below: 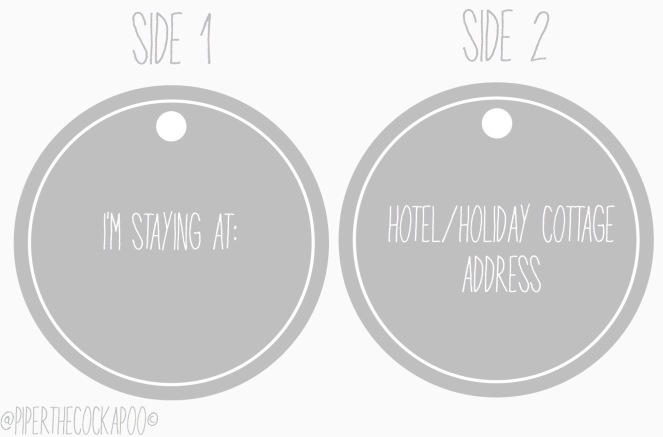 If you’re traveling abroad with your pet, it may be a good idea to buy an additional tag with your information translated into the language of your destination country. Remember to add on that your dog actually lives in the UK! A lot of foreign countries have different attitudes towards dogs & in some countries it’s completely normal to see dogs wandering the street on their own.

I always believe it’s better to be safe than sorry when it comes to keeping our dog safe. People say “it’s a law which isn’t policed, nobody ever checks”. Nobody ever wants to purposely put their dog in danger & we all try our best to keep our dogs as safe as possible. After all, they are part of the family! A dog is a child who cannot speak, so you want your tag to say everything a child would say to a kind adult if they were lost. Remember, there are more good people in the world who want to help, than bad people who want to cause harm.

I hope that we have helped to clear things up, and maybe even informed some people who weren’t aware the law even existed!

jumping on the bandwagon 🐑 #DollyPartonChallenge
a smile is all you need ☺️ #HappyGrin
goodnight 😴 #SleepingBeauty
Remembering those who paid the ultimate sacrifice ❤️💜 #LestWeForget
Happy Howloween 👻🎃 #Boo
Happy 4th Birthday to Princess Piper 👸🏼💕🥳 #PiperTurns4
Say hello to Piper’s new bestie, Ted 👋🏻 #PooPals #DoubleTrouble #Cockapoo
Amazing what you can pick up in @bandq_uk these days 🤣 #TheresAPooOnAisle10
my only sunshine 🌻
Sunday night vibezzzz 🧖🏼‍♀️💁🏼‍♀️ #PamperNight
Super excited that @bbccountryfilelive is coming to our stomping ground. Who else is going this weekend? 😁 #CountryfileLive
Happy 12th Birthday to big bro Ted 🥳 #BirthdayBoy #Labradoodle