Probably nearly a year ago now I invested in a dehydrator to make healthy homemade dog treats, so I thought I would share one of our favourite recipes with you! I’m part of the Dehydrated Dog Treats group on Facebook, which is great for tips & ideas, and is actually what inspired what you’re about to see below! 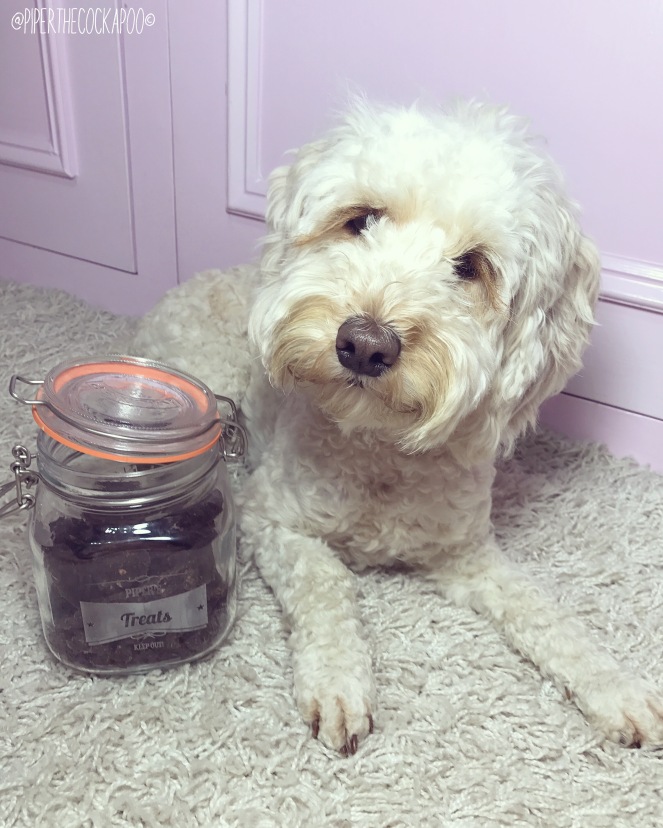 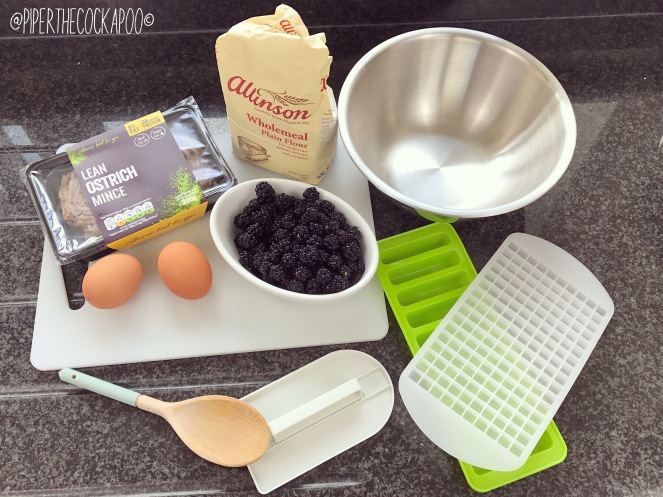 So first things first, the ingredients:

1. Empty all of your ingredients, expect the flour, into your mixing bowl. Mix it slightly so everything becomes “together”. Don’t worry about this too much though, as the blender will sort it out. 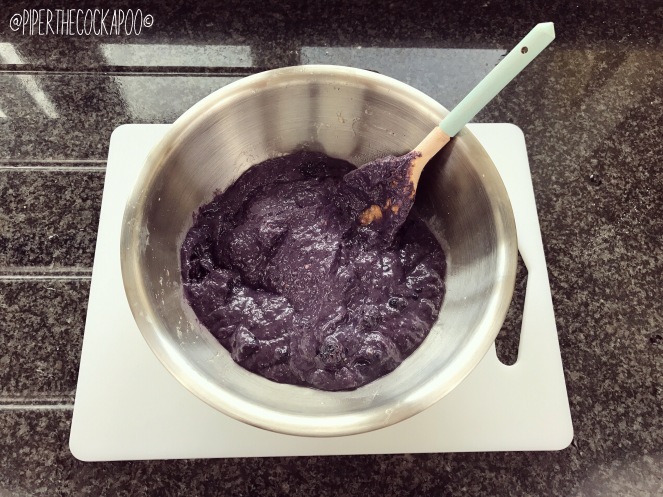 2. Put the mixture into your food processor/blender, and blend until smooth. You want as few lumps as possible. Once this is done, pour the mixture back into the mixing bowl. Now you need to add flour. You want to add enough so the mixture resembles the consistency of a thick cake mix, similar to porridge perhaps. It needs to be quite stiff.

3. Next you need to put your mixture into the silicone moulds. Spoon the mixture in, then use the cake smoothing tool to remove the excess. This isn’t as easy as it sounds, so be prepared for it to take a little while. Once the mixture is in, bang the moulds a couple of times to release any trapped air bubbles. If you’re not using moulds, you can place the mixture directly on to baking paper. In the photo here you can see I’ve just done “splats”. 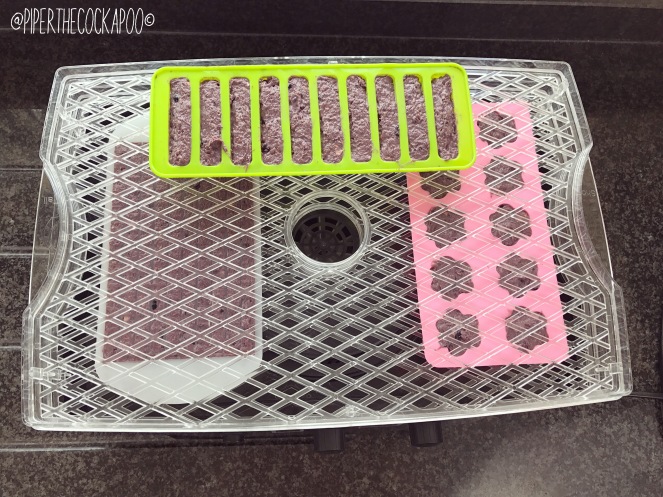 4. Now you need to either put your mixture into the dehydrator or oven, whichever you are using. If you using the dehydrator, make sure that you don’t block the central air column (if yours has one). Use as many trays as you need to, I’ve used 3. If using an oven, place the moulds/baking paper straight onto the oven trays (if this isn’t possible, use a thin oven tray).

5. Set the dehydrator at 70 degrees for around 10 hours. Remember to rotate the trays every couple of hours to ensure even cooking. If you’re using an oven, I would guess it would need to be at 70 degrees for around 2/3 hours, keep checking regularly though! If you’re using moulds in your dehydrator, after around 4 hours turn them upside down, then after around another 4 hours take the treats completely out of the moulds. You would need to do the same for treats in the oven if using a mould, I would guess at around 1 hour & 1 hour 40 minutes- but play this by ear! 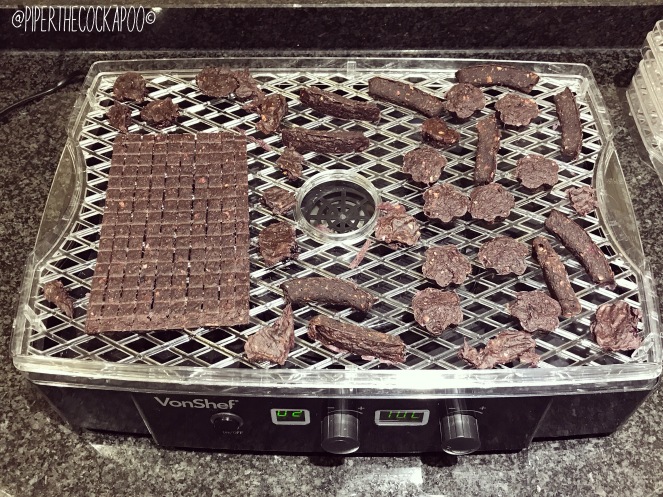 6. The treats should start to harden & go a darker colour over time. You will know they are done as they become hard & snap easily. If the treats are still soft/spongy in the middle they aren’t cooked properly. The bigger treats may take a little longer- so don’t be afraid to add an extra hour or two on the dehydrator (30mins oven) if needed. 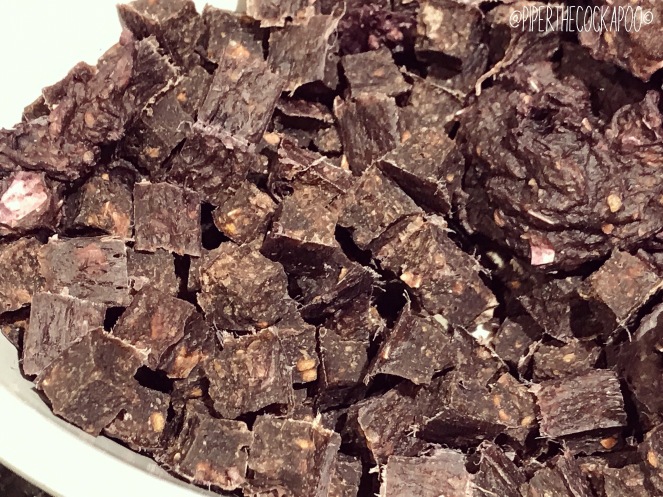 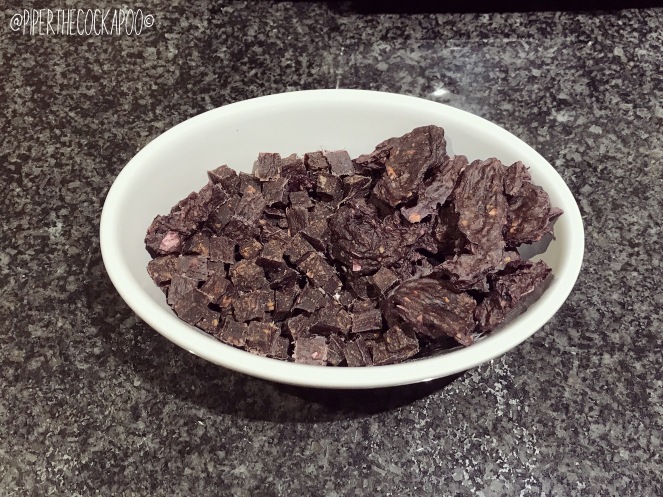 7. Once you are sure the treats are finished, leave them to cool off completely before storing. If they’re stored warm they will ruin the whole batch. Store the treats in an air tight container (I use glass jars), and if you think you’ve used too much you can freeze them until they’re needed.

Don’t worry too much if things don’t go to plan, it’s a trail and error process & the dog will love them no matter what they look like! Remember to wash all the equipment thoroughly, as you’ve been using raw meat. I hope you’ve been inspired to get cooking for your dog! I’m so passionate about Piper’s diet & making healthy treats for her. Making your own is ideal as you know exactly what goes into them!